Why Mastodon is defying the “critical mass” 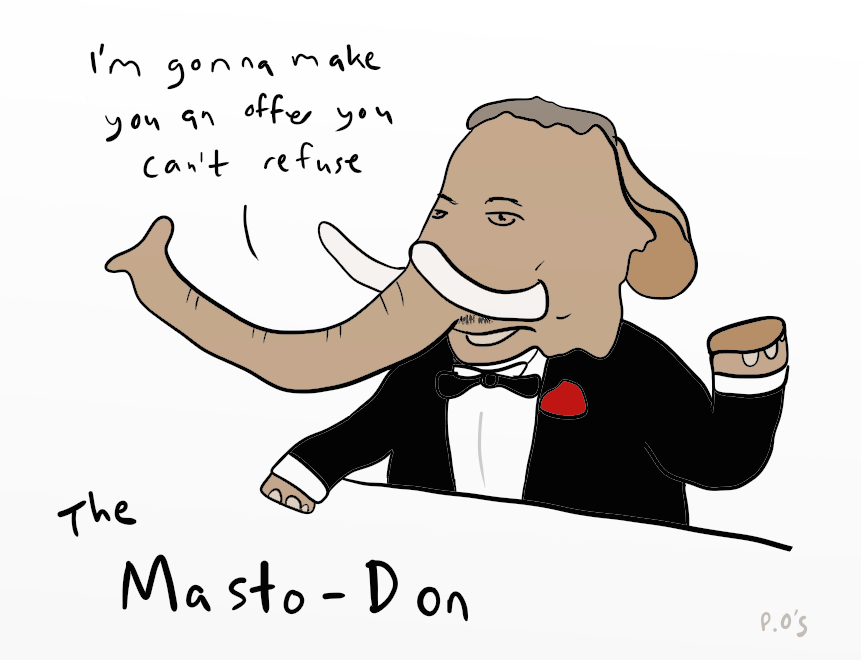 The Masto-Don invites you to join the fediverse. But don’t feel you have to…

Mastodon is now over two years old and (to borrow a turn of phrase from Terry Pratchett), it’s still not dead yet. Somehow it’s managed to defy those early critics who said it “won’t survive” and was “dead in the water”. Even some of those posting on Mastodon in its early days doubted its longevity:

“bet: the link to this tweet won't work in two years” - @[email protected]

More recently, an article about Mastodon’s wider ecosystem — termed “the fediverse” — made it to the front page of Hacker News: “What is ActivityPub, and how will it change the internet?”, by Jeremy Dormitzer. It makes a good case for the importance of the ActivityPub standard, upon which Mastodon and other social platforms are based. However, it still makes the same mistake as those early doomsayers:

The bigger issue right now is user adoption. The ActivityPub network is only viable if people use it, and to compete in any significant way with Facebook and Twitter we need a lot of people to use it. To compete with the big guys, we need big money…

There have been similar arguments in many articles over the last few months. They imply:

But each of these are wrong. Here’s why…

1. The fediverse is not a startup

We’re so conditioned to the venture capital world of startups nowadays that we intuitively think that all new tech ventures need to make it big or go bust. But that’s not the nature of the economic model behind the fediverse, which is sustainable already, while just happily ticking along.

We need to stop judging the fediverse as though it’s a Valley startup competing with Twitter and Facebook.

Jeremy makes a fair point that most instances are “built and run by volunteers with tiny budgets”, but he implies that this must change, whereas most of the Mastodon admins and users I know are quite happy with this model, which frees us from the vested and contradictory interests of advertisers.

It’s easy for me to say, as I’m not hosting my own instance and my admin has kindly declined offers of donations so far. However, most instances appear to be doing just fine, mostly propped up by crowdfunding. Even if some instances shut down at some point (and they do, unfortunately), more are cropping up in their place. Despite the sharp increases and declines with each new wave of users from Twitter, the overall trajectory is up, and that’s what matters — not the speed of the growth, nor reaching some level of critical mass. Michael Mahemoff put this well:

“Mastodon is already “good enough” in its early form to satisfy several niche needs (people wanting more or less or different moderation, people wanting no ads, people wanting clients that are free to innovate, people wanting to own and/or host their own content etc). As it has a sustainable patronage model, it can build up over time and be able to keep innovating.”

In fact, if Mastodon was to grow too quickly, that might have more negative outcomes than positive. Growing gradually allows existing instances to cope better with the load and allows new instances to crop up and cater for some of the influx.

2. It’s also about the quality (of experience), not just quantity (of users)

When I first joined Mastodon, I got excited about each new wave of users coming over from Twitter. I wanted to preach about it to as many people as I could and try to get as many friends to move over there as possible. After a while though, I realised that I was focusing too much on comparing it with Twitter and trying to make it a Twitter replacement. I actually had a valuable network there already and enough reason to visit it regularly, even if I continued to use Twitter too.

Mastodon is based around communities. These communities can be specialist networks based on the topic(s) you’re most interested in. You don’t need all of your friends to be within these communities, to find interesting people, useful content and worthwhile interactions.

As Vee Satayamas noted, if you’re a Twitter user, you may find it useful even if not many of your family members or real-life friends are there. You don’t have to have everyone available on every network. I recently quit Facebook and I’ve still been able to get in touch with my friends via email or text. It would be nice if more of my friends were on Mastodon, but it’s not a show-stopper.

In fact, there’s something nice about the smaller size of my network on Mastodon. I can keep up with my timeline without feeling overwhelmed. It feels less stressful posting there, compared to Twitter, where each post you make could potentially be pounced on by a giant horde! I guess it’s similar to the effect felt by YouTubers, as detailed in this worthwhile read from The Guardian, quoting Matt Lees:

“Human brains really aren’t designed to be interacting with hundreds of people every day… When you’ve got thousands of people giving you direct feedback on your work, you really get the sense that something in your mind just snaps. We just aren’t built to handle empathy and sympathy on that scale.”

For me, Mastodon provides a happy medium ground between the intimate conversations of, say, WhatsApp groups, and the serendipitous potential of Twitter for discovering new people and content.

In my experience, most active users on Mastodon specifically don’t want it to become more like Twitter —and don’t feel the need for everyone from Twitter to be there. For example, people there enjoy that there’s no advertisers and very few brands. For people only worried about their “reach” then yes, Mastodon won’t be as valuable. But most Mastodon users won’t miss those kind of people from Twitter very much!

We don’t always have to think of Mastodon as a potential replacement for Twitter. It’s different — on purpose. I understand the attraction of imagining that the fediverse could topple Twitter and Facebook, but I don’t think that’s realistic (at least not any time soon). I think it will always be the underdog, but that’s nice in a way.

The fediverse doesn’t just gain value from the quantity of users, it also gains value from the quantity of services. Being based on the ActivityPub standard means that we can use Mastodon, PeerTube (a YouTube-like service), PixelFed (an Instagram-like service) and many others, and they can all interoperate. This gives the fediverse a scale advantage over the walled garden platforms. This is a point that Jeremy’s article made well:

“Because it speaks the same language as Mastodon, a Mastodon user can follow a PeerTube user. If the PeerTube user posts a new video, it will show up in the Mastodon user’s feed. The Mastodon user can comment on the PeerTube video directly from Mastodon. Think about that for a second. Any app that implements ActivityPub becomes part of a massive social network, one that conserves user choice and tears down walled gardens. Imagine if you could log into Facebook and see posts from your friends on Instagram and Twitter, without needing an Instagram or Twitter account.”

It also means that if we ever feel like the service we’re using isn’t going in the direction we’d like (hello, Twitter users 👋), then we can move over to a different instance and still retain access to the overall ecosystem.

The fediverse is growing and that’s a good thing. But it doesn’t need more users. Conveying an idea that it might fail without a massive migration from other social platforms is misleading. And promoting this idea will give people the wrong impression when they join: that they should be seeking value from the quantity of users, rather than the quality of the experience.

So let’s ease up on constantly counting Mastodon’s user base. Let’s ease up on comparing it to Twitter. Let’s stop treating it as though it’s a Highlander-style situation where “there can be only one”. And let’s start enjoying the fediverse for what it is — something different.

Thank you to Jeremy Dormit for being great about me critiquing that part of his blog post (which I otherwise really liked) — here’s his response to my earlier, brief toot that led to this post. Thanks also to my former colleagues at Samsung Internet who took a look at an earlier version of this post.