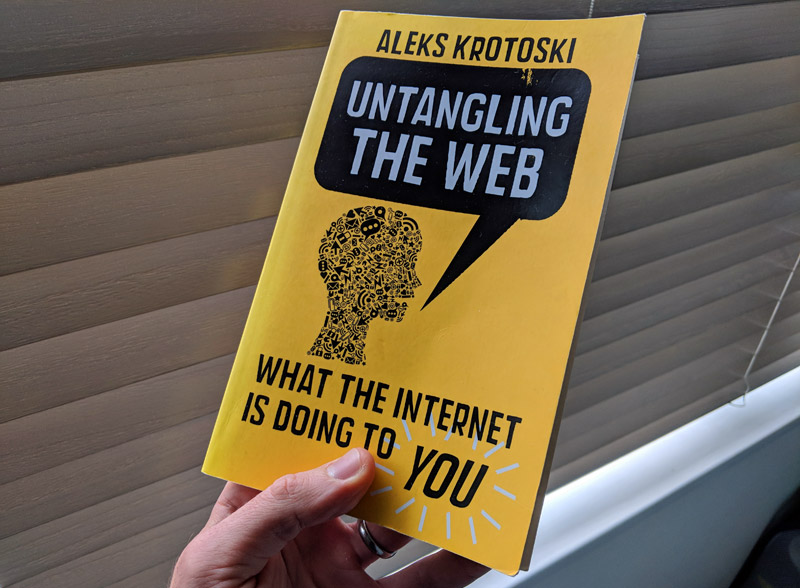 I just finished reading Untangling the Web, Aleks Krotoski's 2013 book on the effects of the Internet on our societies and our lives. Here are my favourite quotes:

“The next digital literacy won't be about the nuts and bolts of how to use the web or a mobile phone, but how to set boundaries about when we let them encroach on our downtime.”

“...now there are other people watching and categorising us, manipulating our social lives for their purposes. The effect is that our seemingly random pathways through the web are actually determined by what we want to know and what we want to hear.”

“We're becoming less interested in different ideas... and opinions that clash with our own. ...Because of the way the technology encourages this by filtering out differences, the way we currently navigate the online world may result in social division instead of social cohesion.”

“With hindsight, we can see how optimistic the people who populated the early internet were. They believed that the technology would expose how trivial our apparent differences are and lead us to greater global social harmony. After all, how can you hate someone because of their skin colour, nationality, religion, gender or sexuality if you discover a mutual affinity for the same kind of comedy... or music...

Rather than creating a global group hug, we're coping with the vast information and possibilities online by going tribal.”

“Once we've identified our tribe... we may fall prey to something called pluralistic ignorance - the belief that everyone else thinks as we do... On the web... we tend to assume that... everyone else is more dedicated to the cause than we are... This effect inspires people to increase their extremism to conform... It's increasingly easy for online hate groups to play on this.”

“[Social] networks, search engines and e-commerce sites are conceptually designed to reduce our concerns about privacy. The technologies themselves aren't passive. "These technologies are as neutral as guns", says Jim Adler.”

“"Technology is neither good nor bad, nor is it neutral", says Kranzberg's First Law of Technology.”

“There are human value judgements in each of [Google's] core components. Someone at some point had to make a decision about them in order to program them in. And this is what we should be aware of: Google doesn't deliver information that's independent. It is a cyborg: part machine, part human. It filters our problems through a technological system that is, at its most basic level, subjective.”

“[The importance Google places] on the number of links to a site stems from the philosophy that the crowd is always wise. Sure, it can be. But groupthink can also lead to dangerous booms and busts, like the South Sea Bubble, Tulip Mania, or the recent US mortgage crisis. As long ago as 1841, the author Charles MacKay worried about the "madness of crowds".”

A more positive note to end on:

“We're so fearful of what [the web] will do to us and our institutions that we forget that we have the power to shape it ourselves... As much as we feel powerless and threatened by what is happening to us online, we have the ability and resources to fight against the things we feel are wrong. Insight and rationality are the greatest weapons against online hate. And thankfully, we have a lot of both.”