10 Things I Learned as a Developer Advocate

This is the blog post version of a lightning talk I gave at JS Oxford last week (slides, video). If you would prefer to read it on Medium, you can find it here.

I recently spent a bit over 2 years as a developer advocate for Samsung Internet. If you're not familiar with the term "developer advocacy", it's a type of role also known as "developer evangelism" or "developer relations". It's about being a bridge between an organisation's developer platform (in Samsung Internet's case, the web) and any developers who might use it. (I recommend Christian Heilmann's Developer Evangelism handbook for a more thorough introduction). 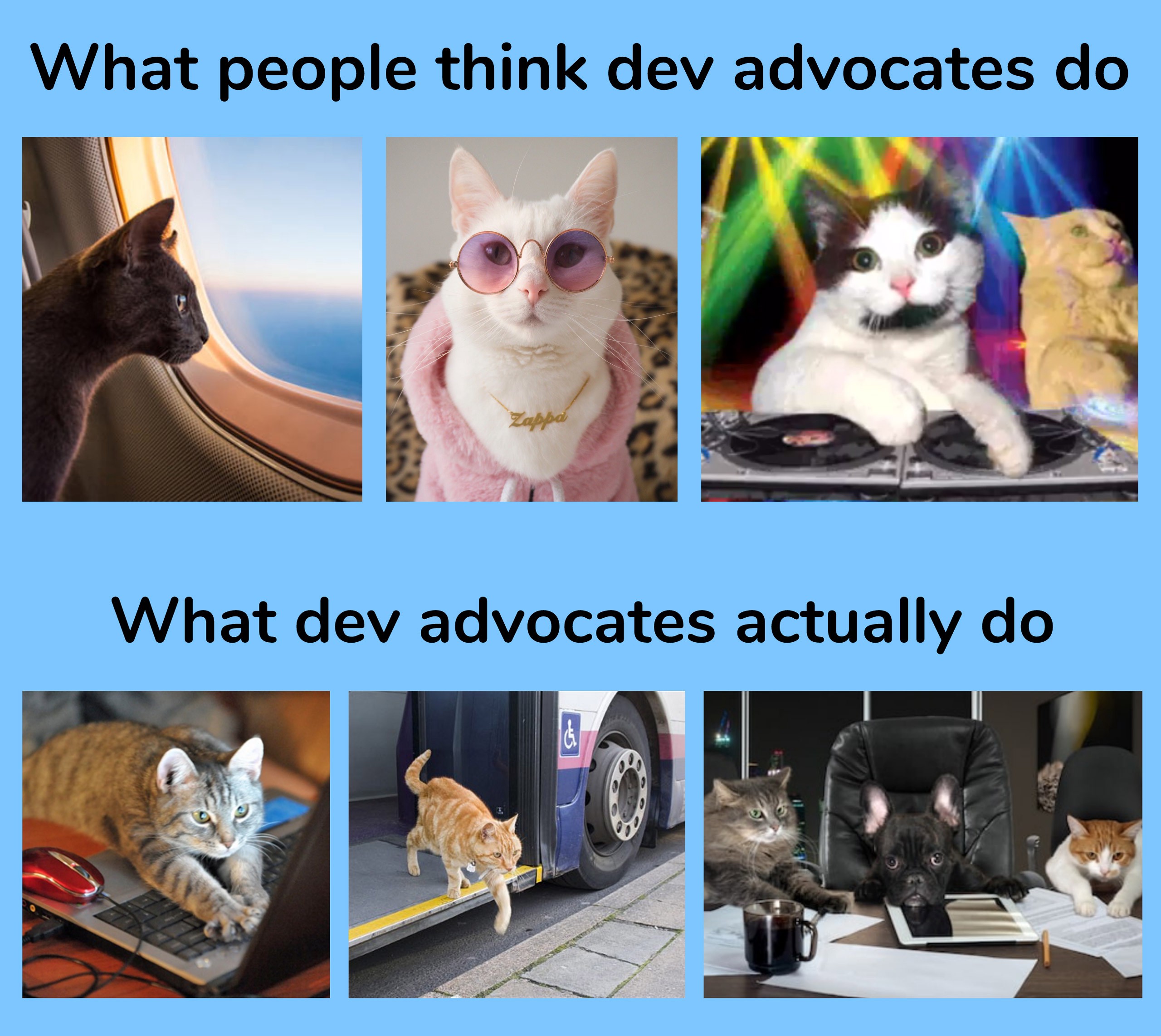 What people think dev advocates do versus what they actually do

The stereotype for developer advocates is that they’re always jetting off on exotic trips, acting like rockstar engineers and partying all the time. Sometimes there might be an element of truth to that! But really most of the time is spent on a computer, responding to questions from developers, writing tech docs and blog posts, making demos and preparing presentations. There is often a lot of travelling, but it’s not always super glamorous. And of course there’s time spent in the office and in meetings like in most tech jobs.

To help share more about the role, here are ten things I learned from my experience as a developer advocate:

This could vary a bit in different companies, but I found there’s lots of freedom in the role. I was able to explore things that I thought would be useful for web developers, coming up with my own ideas for blog posts, demos, and events to speak at. I was given encouragement and opportunities to get involved with open source and web standards.

2. You need self-motivation and discipline

On the flip-side, this freedom means you’ll need to continually motivate yourself and be self-disciplined to keep good habits and stay productive. For example, it can be difficult coming back from a big event to pick yourself up again straight away and start on something new.

Even more than in a regular developer role, it can feel like nothing’s ever really done. There aren’t the usual kind of times — such as the end of a project or a big new feature going live — when it’s natural to take stock. Each calendar year is the most obvious occasion, but that can feel like a long time. So it’s important to have regular retrospectives and remember to celebrate successes.

3. You have to be careful not to overstretch yourself

It can be easy to take on too much — for example, speaking at too many events. Some developer advocates I know seem to be forever on the road — I can’t even fathom their schedules! It’s important to take care of yourself though, because I’ve seen hectic schedules lead people to burnout.

My advice is to set achievable goals that stretch yourself in a good way, but not too much. This can help to have a good mindset and keep going, year by year. I’ve shared more tips about the developer advocacy lifestyle in this earlier blog post: Dealing with the Developer Relations lifestyle

One thing to note: it’s a role that you don’t necessarily have to do full-time. There are people in developer roles who also give talks and write blog posts. You might start out this way and find you love it so much, that you want to do it full-time. For me, I found eventually that developer advocacy is like a doughnut; great as a snack on the side, but not for my whole meal! 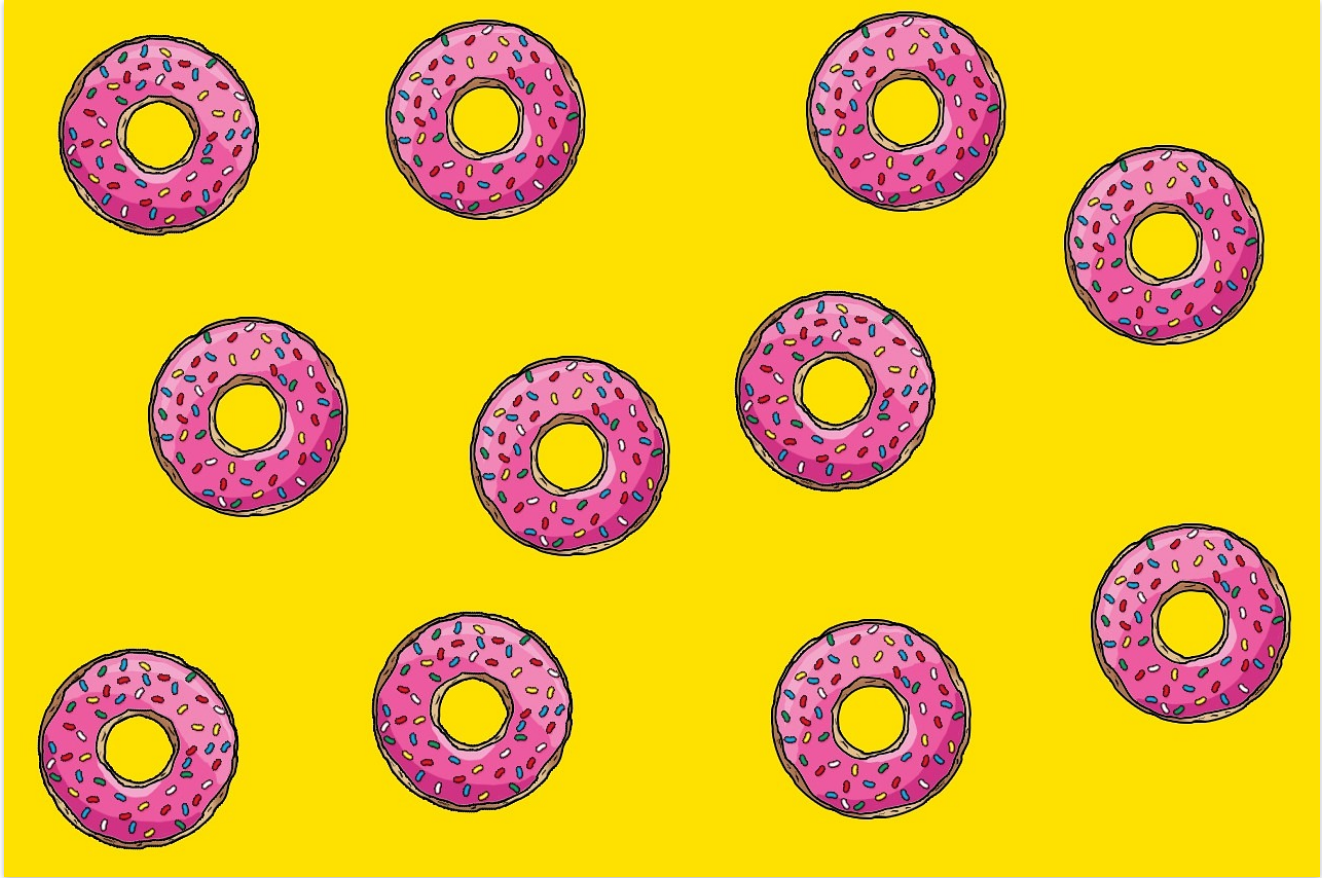 Is developer advocacy your doughnut, or your main meal? (CC0 Creative Commons)

I also learned that mental health issues affect many more people than I would have expected. From getting to know other developer advocates well, I found that a high number of them suffer from issues like anxiety and depression.

It’s from my small sample size and unscientific polling, but it seemed to me that developer advocates may have a higher prevalence of such issues than average. If that’s the case, perhaps it shouldn’t be too surprising. It is anxiety-inducing to keep putting yourself out there. Each time you write a tweet, a blog post or give a talk, you’re opening yourself up to public criticism. There’s always a feeling of pressure over whether people will like it. If you’re the type of person who craves it, developer advocacy could leave you even more reliant on getting your next dopamine hit of peer approval!

In terms of developer advocates’ psychology in general, the common preconception is that they’re all super confident, but I haven’t found that to be the case. In my experience, most are a complicated mix of extrovert and introvert. Some find public speaking — something structured that they can prepare for and control — easier than small talk and meeting people. (NB. I’d like to make it clear that I don’t mean to confuse introversion and mental health together, but I felt this was the most appropriate section for a related point).

At some point you will surely get trolled too! I had it pretty easy — I’m sure it’s a lot worse for people who are high profile and people from minority groups in tech. I still experienced it on the odd occasion though, both on social media and in real life.

Although it’s common advice, I do think it’s important to remember not to feed the trolls! It’s difficult sometimes, but it’s much better to ignore it, or diffuse the situation and move on as quickly as possible. When it gets your blood pressure up and it’s hard to put it out of your mind, don’t just bottle it up, but speak to friends or family about it.

6. You’ll get judged by your follower count

Some people will judge you on your social media follower counts, using it as a proxy to assess your level of influence and your worth as a developer advocate. For example, some conference organisers may use it to select their keynote speakers. I’ve also heard of some developer advocacy teams setting a high follower count as a prerequisite for hiring.

On the one hand, this can be damaging for your feeling of self-worth, when you can see how far behind other developer advocates you are. On the other hand, for those predisposed to social media ‘addiction’, it could be a dangerous role — further fuelling that craving of social media engagement!

Back to good things though! It’s a fantastic role for meeting cool people. At all those conferences and meetups you’ll meet tonnes of brilliant and enthusiastic people. And you’ll get to work with amazing, creative colleagues (I miss my Samsung Internet colleagues already!). It’s also good for meeting the tech celebrities, who are real people and usually very nice too!

It’s great for opportunities to collaborate with people too. For example, working together on a demo or showcase. I also really recommend co-speaking with colleagues, or even people working at different companies. I much preferred travelling to events with someone else than on my own. It’s good to learn from each other and fun to share a stage too.

9. A career is a long time. Trying a different role is good!

A career is a long time and a change is as good as a rest. Building up different kinds of experience can be both useful and refreshing. In the end I started to crave going back into a development team again, but I’m very glad I was a developer advocate for a couple of years and I don’t have any regrets trying something different.

And finally… This one’s specific to the web (I was a web developer advocate), but I learned that the web needs new voices — both within the web standards communities, and communicating out from those groups, to web developers publicly.

We don’t want the web to be too centred around one popular Internet company, so it’s important for other organisations to have a strong voice too. And we need a diverse set of voices, with better representation from minority groups in tech.

I’ve tried to be as honest as possible about developer advocacy in this post, sharing both the positives and the challenges. If it still sounds like something you’d be suited to, then I hope I haven’t put you off! It can also be very rewarding, as well as fun.

Thank you again to my former colleagues at Samsung Internet, for all the opportunities, fun times and llamas!