Robots, Virtual Reality and the Internet of Things? I Can't Believe It's JavaScript!

It’s not that long ago that many people thought that JavaScript was a “toy” language. I always enjoyed writing JavaScript myself, but I confess that a decade ago, I too, saw it as just a way to do little bits of scripting in the browser - things like clickable tabs, photo galleries and AJAX. Not a language that you could build real applications with.

But since then, we have witnessed JavaScript’s meteoric rise. This data from Github shows how it’s soared well out in front compared to other languages: 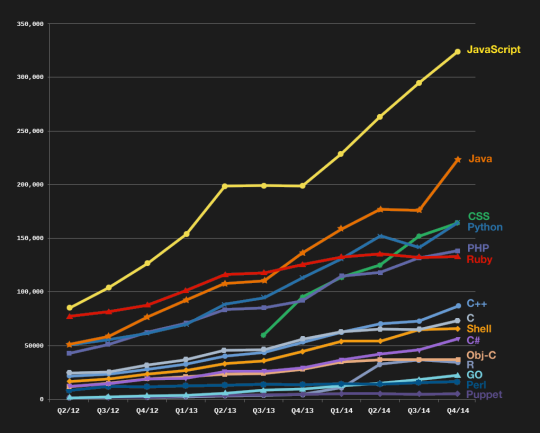 Graph by loggly - data from Github

Many of the kinds of applications that we previously would have considered impossible to build in JavaScript, are now being built in it.

Here are some examples that might just make you say: “I Can’t Believe It’s JavaScript!” 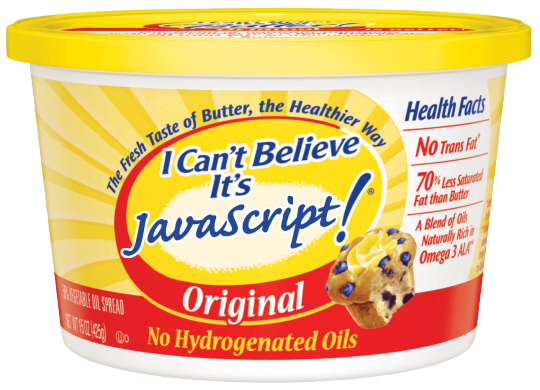 This Sound Machine looks and feels like a native app, but it’s built with Web technologies. Kristian Poslek posted it as an example of building a desktop application with Electron (previously called Atom Shell).

Did you know that Atom Editor and Slack are also built with Electron?

An old favourite of mine is Run Pixie Run: 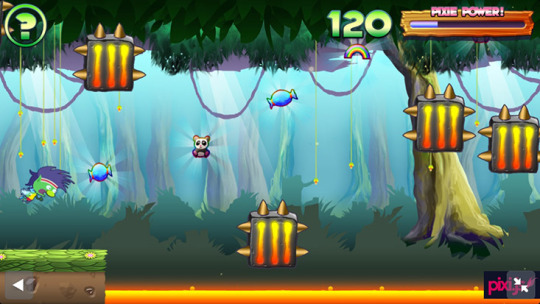 It was built using Pixi.js, an excellent 2D graphics library. It uses WebGL for best performance if it’s available, otherwise it seamlessly falls back to canvas for better browser support.

It was built using the popular 3D library, Three.js. It’s most famous for WebGL apps, but you can also use renderers for Canvas, SVG and CSS3D. There’s tonnes of great examples at threejs.org and new ones are often added.

If you’re interested how Felix ensured the game ran so smoothly on mobile, be sure to read his post Building a 60FPS WebGL Game on Mobile.

Did you know you can use JavaScript to control robots too? Here’s an example of someone controlling a robot arm using the Microsoft Kinect:

It was built with Jonny-Five, a JavaScript robotics programming framework. It lets you interface with Arduino and a bunch of other types of electronics boards and kits too.

Now imagine having a whole army of robots mimicking your motions. Yes, you could take over the world - using JavaScript!

If you want some air cover for your apocalyptic land army, good news: JavaScript can also do drones. Here’s one of my favourite examples from Nodecopter:

It was developed using ar-drone, a Node.js implementation of the protocol used by the Parrot AR Drone.

But if you’d rather stick to the front-end, you can also control drones through the browser! Here’s an example using Firefox OS (skip to 2:50 to see it in action):

This one was developed using the nascent Web Bluetooth API. It’s not a proper standard yet, but it’s on the way... It’s has some support already in Firefox OS and also Chrome OS.

JavaScript isn’t just for standalone robots. It can also do Internet of Things... things!

For example, if you’re like us at pebble {code}, you probably drink far too much coffee. So think how much time you waste actually going to the kitchen to make yourself a brew. What if you could just tap a button on your phone and have it start before you even walk over? 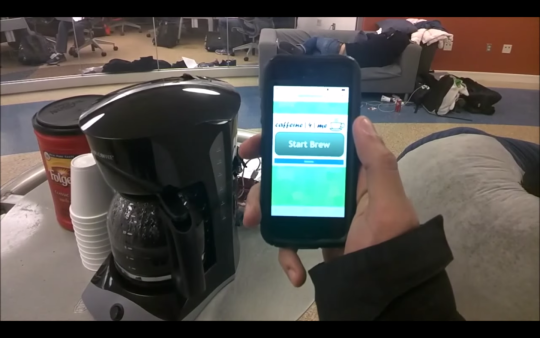 Thankfully you can - using Caffeine 4 Me from Luke Kuza and friends. It uses Tessel, an Internet-connected microcontroller you can program with - you guessed it - JavaScript. It runs Node.js and it’s compatible with all your favourite NPM modules.

Alternatively, if you have a table football table in your office and you’re fed up of having to keep score, why not introduce some JavaScript-based goal line technology? 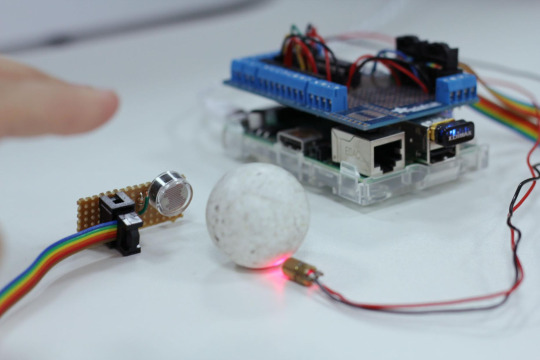 This is one my colleagues are working on. It uses light sensors to trigger an action when the ball crosses the line. It uses a Raspberry Pi and its GPIO (general purpose input/output) pins - we developed a little library for that called Pinhead - along with an analog to digital converter. Then it’s just a Node and Express server which talks to a front-end using web sockets, via Socket.io. Now you can display the score up on a big screen! 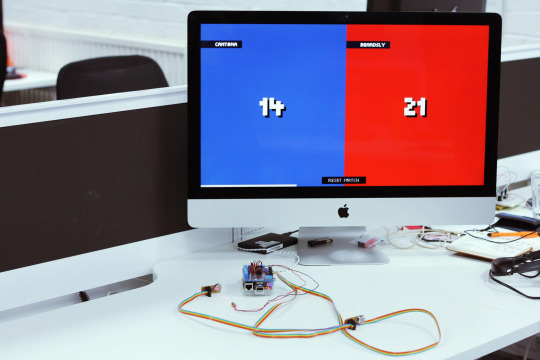 Next, there’s been some talk about how the Apple Watch doesn’t support web apps, so that means the Web is dead (yaddi yadda)... But - you can build smart watch apps with JavaScript.

This Pebble Watch weather app pulls down the weather for your location from OpenWeatherMap.org: 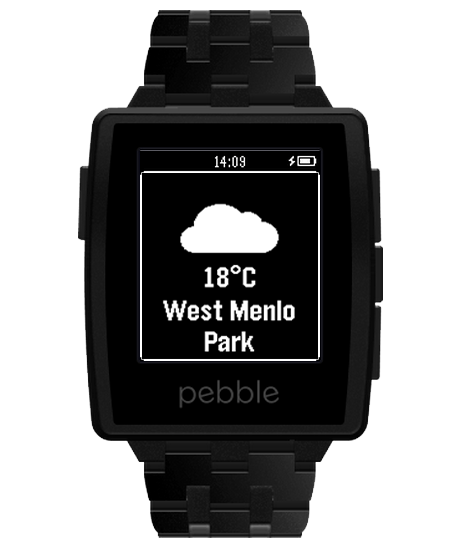 It’s built using Pebble.js, a JavaScript SDK for Pebble watch apps. (NB. In case of any confusion, I work for pebble {code} the technology innovation consultancy, not Pebble the smart watch company!)

You can even develop Pebble.js apps in the browser using their cloud IDE and sync them directly onto your watch. Smart! 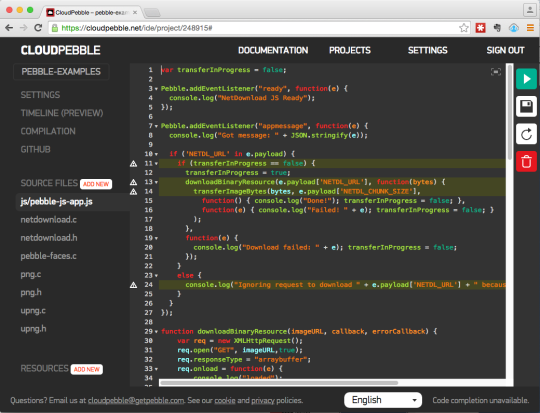 Finally... the latest hot thing, about to take off with the consumer version of the Oculus Rift, HTC Vive et al… JavaScript can also do Virtual Reality.

Here’s one I made earlier: Virtual Reality fire safety training, using the Oculus Rift along with a Leap Motion controller so you can use your hands to interact with the scene:

It uses Web VR, a new JavaScript API that lets you integrate with the Oculus Rift or Google Cardboard, using your browser. It’s not in a mainstream browser release yet, but you can get hold of Firefox Nightly or a special build of Chrome to try it out (check out mozvr.com).

Essentially it extends the full screen API so you can launch your web page on the actual Head Mounted Display. It gives you the transformation you need to morph the view appropriately for the device. Plus the orientation data so you can move your scene around appropriately as the user turns their head.

Then LeapJS provides the hand and finger position data, via a web socket data stream.

Can you believe it? 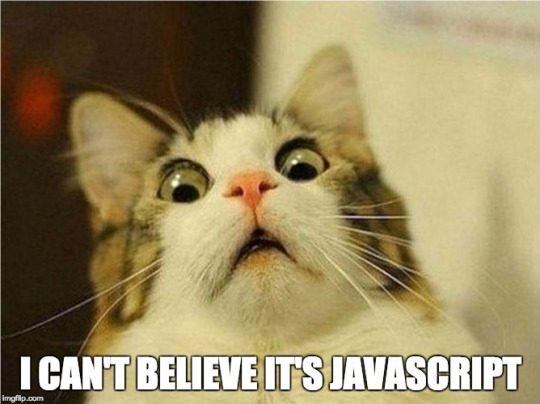 From desktop apps, to virtual reality - JavaScript can do it all. Some of these examples might be on the bleeding edge; you might not be able to put some of this into production just yet. But I reckon it’s a safe bet that these technologies are up-and-coming, and by exploring them now, we can get ready for when they take off. All using our favourite language. One that no one can call a toy language anymore.... unless they simply mean that there’s so much to play with!

It’s a great time to be a JavaScript developer, don’t you think?